Anyone who has ever seen a movie knows the name Tom Hanks. The award-winning actor is one of the world’s most popular entertainers whose films have grossed over $4 billion worldwide. Though most people know him from movies and television, Hanks’s acting career began in the halls of Skyline Hills High School in Oakland, California, under the direction of drama teacher Rawley Farnsworth.

Eager to learn the craft, Hanks took all six of Farnsworth’s classes, during which Farnsworth immediately spotted a genuine comedic talent but encouraged Hanks to be a more dramatic and versatile actor. “Tom was very smart in that respect,” recalls Farnsworth. “I always knew he would go places.”

Indeed, Hanks did. In 1993, he won an Academy Award for his gripping depiction of Andrew Beckett, a lawyer infected with AIDS fighting against bigotry and homophobia in the film, Philadelphia. During his emotional Oscar speech, Hanks credited his experiences with Farnsworth as a major source of inspiration.

“Here’s what I know… I would not be standing here if it weren’t for two very important men in my life, two I haven’t spoken with in a while but I had the pleasure of just the other evening – Mr. Rawley Farnsworth, who was my high school drama teacher, who taught me ‘Act well the part, there all the glory lies’, and one of my classmates under Mr. Farnsworth, Mr. John Gilkerson. I mention their names because they are two of the finest gay Americans, two wonderful men that I had the good fortune to be associated with, to fall under their inspiration at such a young age. I wish my babies could have the same sort of teacher, the same sort of friends.”

In thanking Farnsworth that night in front of millions of people, Hanks reminded us of the true value and inspiration that teachers bring.

A Journalist Learns the Importance of the Story 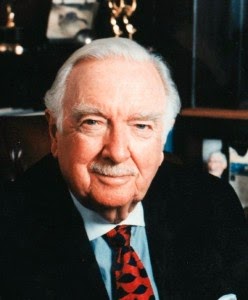 When it comes to journalists, they don’t come any greater than Walter Cronkite. Often called “the most trusted man in America,” Cronkite covered nearly every major news event in his sixty-year career. He liked to tell stories with great passion, a passion he learned from his high school journalism teacher, Fred Birney.

As a student at San Jacinto High School in Houston, Cronkite was inspired by Birney’s pioneering efforts and passion for journalism. During a time when few schools had journalism classes or student newspapers, Birney convinced the Houston Board of Education to allow him to teach a journalism class once a week at three local high schools.

“He was a newspaperman of the old school and taught us a great deal about reporting and writing. He also became a sponsor of the San Jacinto High School newspaper, the Campus Cub. Under his tutelage, we published it monthly, whereas it had previously been published in a casual manner, just three or four times a year. During my junior year, I was the sports editor of the Campus Cub and its chief editor in my senior year,” recalled Cronkite.

Upon nearing graduation, Cronkite was torn between pursuing a career in journalism and becoming a mining engineer. But thanks to Birney, the choice was clear.

“He taught me so much in those high school classes, and by securing me early jobs, he cemented my desire to be a reporter for the rest of my life. He was my major inspiration. I always credit Fred Birney for my career,” added Cronkite.

The Man Who Inspired Gandhi There are few people who have had a more profound effect on the world than Mahatma Gandhi. As mentioned earlier, he was an inspiration for Dr. Martin Luther King, Jr., as well as for Nelson Mandela and so many others.

Gandhi also learned from someone, Dadabhai Naoroji, an Indian leader who helped to start the Indian Independence Movement in 1857. Upon learning of Naoroji’s intentions, Gandhi was eager to join in the efforts. In 1888, he wrote Naoroji a letter, which read, “…you will, therefore oblige me greatly if you will kindly direct and guide me and make necessary suggestions which shall be received as from a father to his child.”

Naoroji took Gandhi under his wing and instilled in him the importance of peaceful protests. Thanks to the teachings, Gandhi was able to hold the largest demonstration of nonviolent resistance in 1947, which handed the country of India back to its people. Upon describing their relationship further, Gandhi would later write, “The story of a life so noble and yet so simple needs no introduction from me or anybody else. May it be an inspiration to the readers even as Dadabhai living was to me. And so Dadabhai became real DADA to me.”